Load cells are often equated with pressure sensors, force sensors, and/or pressure transducers. While there is a vast amount of overlap between these categories, technically speaking they do not have identical member sets.

Sensors are any devices that are able to sense physical phenomena and react accordingly. Its output may or may not be readable and meaningful.

Load cells are commonly understood as pressure transducers which only produce electrical output.

Furthermore, a slight difference exists between the phenomena which pressure transducers and load cells actually measure. Pressure transducers specifically measure pressure, which is defined as force applied over a set surface or area (and measured in Pascals, psi, etc.). Load cells, on the other hand, generally measure force directly (in Newtons) without reference to a specific area.

Industrial load cells as we know them today did not develop until the nineteenth century. It should be noted, however, that devices for accurately measuring pressure or loads have existed since antiquity. Some of the earliest load measuring devices were the “equal arm balance” (which was developed in Egypt) and the “steel yard balance” (which was developed in Rome). The earlier invention featured a column and horizontal bar connected to a pair of pans, while the latter invention featured two metal arms of unequal length and a sliding, known weight that helped to determine the weight of an unknown load.

Leonardo da Vinci’s invention of a gradual dial scale (in the late 1400s) marked the first appearance of an automatic balancing system. It was able to determine unknown weights by the position of known, calibrated weights on a mechanical lever. Over the next couple of centuries, a few other weighing technologies developed, including the Roberval scale and spring scales.

The first actual load cells operated pneumatically and hydraulically. Load cells were soon defined, however, by their dependence on strain gauges, mechanical devices which enable pressure readings by changes in their electric resistivity. The most common configuration of strain gauges in use today was developed in 1833 by Samuel Hunter Christie. Ten years later, English physicist Sir Charles Wheatstone improved and popularized Christie’s design, which is today known as the Wheatstone bridge equation. 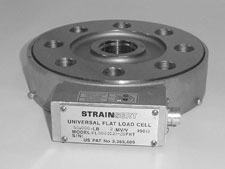 Today, a majority of load cells depend on strain gauge technology and the Wheatstone bridge equation. They are ubiquitous in the industrial world due to their high levels of accuracy and (relatively) cost-effective ways of producing pressure-related information.

The physical construction of load cells can vary greatly, depending on the industrial arena they will be utilized in. Such variation occurs with respect to building material, size, and shape. The outer assembly or structure of a load cell is known as the spring element and can consist metals such as carbon steel or aluminum. A majority of load cells are constructed of stainless steel due to its great versatility and durability under physical and thermal stress. (Variation in size and shape will be covered more in the following sections.)

The two basic components of a load cell are the sensing element and circuit. The sensing element is responsible for receiving mechanical pressure, while the circuit portion enables such pressure to be translated into electrical output. Generally speaking, load cells operate via pneumatic methods, hydraulic methods, or strain gauge technology.

As has been previously mentioned, the sensing element in a load cell is most often a strain gauge. Strain gauges usually consist of fine wire or foil (in the shape of a coil or grid) which is mounted on and bonded to specific places on a structural element. (Some piezoelectric sensors which utilize crystals can be considered strain gauges.) In light of this, strain gauges can be conceived of as specialized, miniature circuit boards. They work by converting internal deformation of the element they are bonded to into electrical signals through changes in their own electric resistivity. Changes in a gauge’s resistivity proportionally correlate to – and thus enable the precise measurement of – weight, force, or strain. It should be noted that different strain gauges possess different sensitivities to mechanical strain; a gauge’s particular sensitivity is known as its gauge factor (GF). Strain gauges are critical to many types of load cells and many types of applications. For example, both compression and tension load cells heavily use strain gauges, while force gauges depend on them in push-pull testing and flow measurement.

The circuit is the connection of gauges or sensors throughout the load cell. The most basic designs consist of four gauges, which make up the measuring circuit. (More complex and detailed cells can have up to thirty gauges as part of the measuring circuit. Since an increased number of gauges correspond to increased sensitivity, advanced load cells require many gauges to accurately record and monitor variance in measurement.) The aforementioned Wheatstone bridge equation consists of 4 gauges arranged in a square; a voltage meter stretches between two corners of the square as it is power/ground connected to the other pair of corners. The Wheatstone bridge equation is so heavily used because it is an efficient way of amplifying changes in gauge resistivity and corresponding electrical output. At the same time, the Wheatstone bridge equation helps to deter the effects of temperature changes on a load cell, which can override changes caused by mechanical strain.

After load cells transduce mechanical stress into electrical energy, the information that load cells monitor is then signaled to a recorder or other computerized data collection system. Load cell outputs include analog voltage, analog current, analog frequency, switch or alarm, serial, and parallel. When load cells are used to measure any variance in certain ongoing systems, the load cells can sound an alarm or shut down the system itself until the discrepancy is corrected.While strain gauge load cells are the most popular type of load cell, they are not the only type.

Piezoresistive type load cells overlap significantly with stain gauge technologies. They work by directly measuring electric charge that builds up in piezoelectric crystals from applied mechanical force. Yet other types of load cells measure force by changes in magnetism, frequency (e.g. vibrating load cells), and the ability to hold electric charge (e.g. capacitor load cells). It was previously noted that the first load cells operated on pneumatic and hydraulic principles. Such load cells are still in use today.

Hydraulic load cells depend on increasing pressure within oil-filled cylinders from force applied to a piston. Such changes in pressure are then transmitted (e.g. via a hose) to the load cell’s sensing element (e.g. a Bourdon tube).

Pneumatic load cells depend on air forcibly deflecting a diaphragm sensing element as it is applied to one of its ends. When this deflection occurs, it modifies pressure inside the load cell as well as pressure of the air stream escaping the bottom of the load cell.

Sometimes load cells are labeled by the types of force they measure. In principle, load cells are designed to measure a specific force acting in a single direction. Most often, load cells will work by calculating compression or tension. Exceptions, however, do exist. Sometimes a load cell will measure an object through both of these applications, rather than one or the other.

Pressure sensors and load cells are used in food processing industries to precisely measure ingredients and to properly distribute the products during packaging. In industrial warehouse environments, where pallets of inventory are shuffled around, load cells are often used to determine the precise weight of loaded pallets, which is crucial for the filling and accepting of orders.

Other load cell applications include the testing of bridge building materials such as beams for tension strength, as well as in railcar weighing and truck scales. Load cells are essential components in many calibration systems, as well as for fatigue testing in research and development laboratories. With reading accuracies within 0.25%, load cells, sensors, and gauges provide accurate mass, weight, and pressure measurement of very small loads to loads of several thousand tons.

While load cells are extremely useful and sophisticated, they are also vulnerable industrial components that can be compromised without proper maintenance and care. The most important factors in a successful weighing system are the proper selection of weighing materials, initial installation, and consistent maintenance/calibration. In calculating capacity of a load cell, factors that must be considered are the maximum force value, the dynamics of the system (i.e. frequency response), the effect that placing the transducer in the force path will have, and the maximum extraneous loads that the load cell will handle. When mounting load cells, factors that should be considered include whether the load cell will be in the primary load path or whether it will see the forces indirectly, whether there are any physical constraints that should be met for size and mounting, what level of accuracy is required, and what environmental elements the load cell will be subjected to that may cause special problems. These complexities are necessary to have the correct measuring force load cell in place, to ensure the safety and productivity of the industries employing them.

Proper calibration is a key aspect of load cell usage. Many cellular manufacturers provide pre-calibrated instruments, and certain international standards (e.g. ISO9000) provide a window of no recalibration up to two years. Best practices, however, include recalibrating a load cell at least every year. Frequency of calibration often correlates to high accuracy and improved load cell performance. Furthermore, regular inspection and cleaning of load cells may actually preempt certain operational issues and the need for re-calibration.

A quality load cell supplier can assist you in making the best choices in terms of load cell selection and usage. Although the advantages of load cells outweigh their tendency to cost more up front, it is still important to find an experienced and responsive manufacturer who will enable you to maximize your load cell investment. As with any industry, it is prudent to learn required standards and the adherence of suppliers to those standards. Examples of standards relevant to load cells are ASTM E4 (which regulate force verification of testing machines) and ASTM E74 (which regulate the calibration of force measuring instruments).